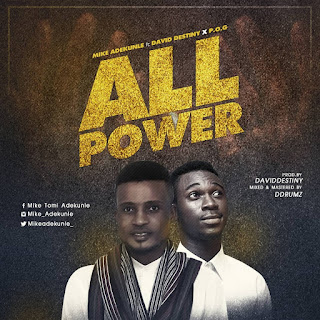 HAPPY WEEKEND TO YOU ALL  OUR SUNDAY BEST IS MIKE ADEKUNLE.
Mike Adekunle is a passionate gospel music minister and a song writer. He is the founder of a worship ministry “Preachers Of Goodnews – P.O.G”. Mike Adekunle is set to release a new song titled “ALL POWER” ft P.O.G & DAVID DESTINY

which was also produced by David Destiny. According to Mike Adekunle “ALL POWER” was divinely inspired by God from the book of Matthew 28:18-20, to be a blessing to people across the globe, after going through some hard times God inspired him to write the song after studying the word of God, despite all he’s being through,he wholly surrendered himself to JESUS without any delay.

“ALL POWER” is a song of rigid belief in God, for being unquestionable and unsearchable,it’s a song of deliverance from every terrestrial powers.
THE CHRONICLE OF “”ALL POWER””
After some few days of writing the song, God gave me a Job, I got my personal studio equipments,which was where we recorded the song and working with David Destiny as a producer.
After Mike’s previous songs “OLORUN TON SE BEBE”, ” APPRECIATE”, AWON TEMI PARA, this new song is going to be a blessing to many by His Grace.
Click here to listen the new song
Contacts:-
Facebook:
@Mike Tomi Adekunle
Instagram:
@mike_adekunle
@preachersofgoodnews
Twitter:
@mikeadekunle_
@madeandpog

OLOTA OF OTA – I AM NOT AT LOGGERHEAD WITH ALAKE AND GOV AMOSUN, STOP THE RUMOR