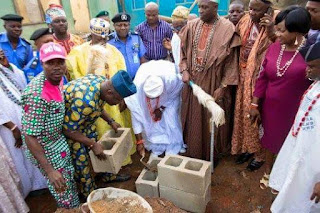 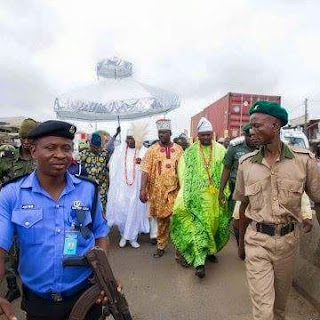 The Police station is sited directly opposite Magistrate Court, Ota. The site used to be a Police post before it was relocated to Sango Ota which now turned to be a Police Division.
The Olota of Ota, while laying the foundation stressed the need for Ota Police station as a way of bringing law enforcement, security of lives closer to his people. He assured the people of Ota that security of lives and properties was paramount in his services to them and the new Police station will further aide that.
In an interview with VOA News, the Area Commander of Sango Ota Police Division, Fayoade Adegoke on how the new Police Station will aid effective Policing in Ota and its suburbs, he emphasized that in line with the Inspector General of Police’s policy to ensure that Policing gets nearer to the people, there was need for the new Police Station, adding that the closer Police stations are to people, the more effective policing is achieved.
ACP Fayoade Adegoke
He further stressed that having a Police station in Ota will go a long way to combating criminal activities. He advised intending criminals to steer clear from criminal acts because they were not ready to give room to criminal such.
In another historic visit to Sango Ota, market women, artisans, clerics and admirers all trooped out to welcome His Royal Majesty, Oba Adeyemi Obalanlege, Olota of Ota.
The Chairman of Sango/Ijoko LCDA, Alhaji Fatai Ebony appreciated the Olota for paying Sango Ota a historic visit. He said that they had been looking forward to welcoming the Olota of Ota to Sango Ota. 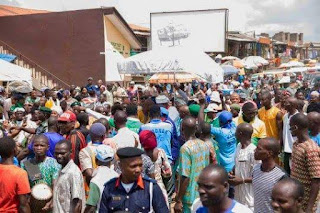 While addressing the crowd, HRM Oba Adeyemi Obalanlege sued for putting an end to lingering crisis among warring factions, he emphasized that it was the only means of ensuring peaceful coexistence. He urged all the inhabitants of Sango Ota, both landlords and tenants to see themselves as one in that Sango Ota is important to Ogun State as it is the commercial nerve centre of the State. He further appreciated Ogun State Governor, Senator Ibikunle Amosun for ensuring peaceful coexistence among all inhabitants of Sango Ota.
In his own speech, the Chief Imam of Sango Ota, Sheik Shafi appreciated Olota of Ota for initiating a re-conciliatory move between Sango and Ota indigenes. He added that there was no conflict between indigenes of Ota and Sango, stressing that those that escalated the mere misunderstanding to conflict did that for their own personal gains.
Sango Ota Market women and traders also received His Royal Majesty, Oba Adeyemi Obalanlege with joy and happiness in a separate visit. They pledged their allegiance to him and also prayed that his reign favours them.
HRM Oba Adeyemi assured the market women of his continuous prayer and fatherly support at all times.