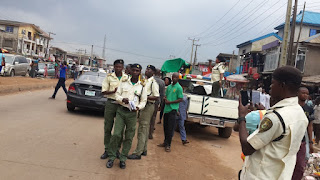 The Ogun Traffic Compliance and Enforcement Corps (TRACE) yesterday disclosed that no fewer than 12,800 traffic offenders were apprehended, while 11,697 people were rescued unhurt by operatives of the agency and also realised N44.8 million as internally generated revenue between January and August this year.
The TRACE Commander, Seni Ogunyemi, disclosed this yesterday while playing host to members of the Ogun House of Assembly Committee on Transportation who were on an oversight visit to the agency’s office in Abeokuta, the state capital.
He added that TRACE had established additional divisional TRACE commands at Agbara, Atan, Mile 2/Rounder Ayetoro, Ikenne, Oke-Odan, Ogbere, Ogijo, Ijebu-Igbo and Odeda in the state.

I cannot support Atiku to be the president of Nigeria – Obasanjo