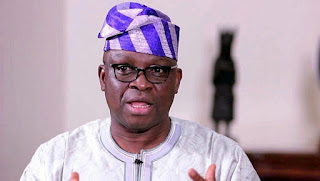 “I congratulate Gov ibikunle Amosun for LOSING the guber election of his political son, Adekunle Akinlade of APM.
“He can now join our club, having forcefully supervised & funded the rigging of Ekiti 2018 election by the same Prof Abdulganiyu Raji who served as REC in both states.
“YE Ibikunle Amosun, pls join us as we battle our orchestrated ‘loss’ at the tribunal. What goes round has come round. You “Ja Ekiti Gba!”, they have “Ja Ogun Gba.”
“YE, please remember to congratulate HE. Dapo Abiodun o.
“My name is Ayo Fayose,” Fayose wrote on his Twitter account. 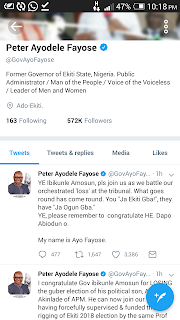 5 members of the Ogun House of Assembly defected to three different parties.