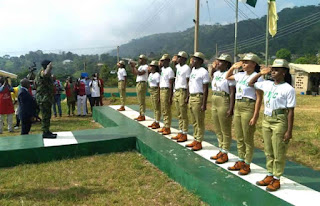 The National Youth Service Corps has redeployed no fewer than 329 corps members posted to Ogun state to other states on marital or health grounds, having completed their orientation exercise.
Mrs Josephine Bakare, the NYSC State Coordinator, Ogun state, said this on Monday, at the formal closing ceremony of the orientation programme, which began on August 28 at the NYSC Permanent Orientation Camp, Sagamu.
Bakare said that the redeployed corps members were part of the 2,134 NYSC 2018 Batch “B’’ Stream II, who had just completed the orientation exercise.
She said that in Ogun state, corps members had been deployed to teach in schools, work in state and local government establishments, while some had also been posted to some cottage and agricultural industries.
Bakare urged employers of corps members to give them welfare packages that would motivate them to be fully committed to their primary assignment.
“Having gone through an intensive and regimented orientation in the past three weeks, I am optimistic of these youths’ readiness to commence the next phase of their national service.
“I commend the corps members for their tenacity and commitment to the national call and wish them a rewarding service year.

Striking Doctors In Ogun State Are Irresponsible, I Am Disappointed In Them — Governor Abiodun