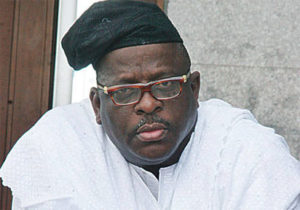 The Senator representing Ogun East Senatorial District at the National Assembly, Buruji Kashamu has replaced Adeleke Shittu as the governorship candidate of the Peoples Democratic Party (PDP) ahead of next year’s elections in the state.
Daily Trust learnt that Shittu whose name was pasted alongside other governorship candidates of 38 political parties by the Independent National Electoral Commission (INEC), “voluntarily withdrew” from the race for Kashamu.
Shittu had emerged the governorship candidate of PDP from the primary conducted by Bayo Dayo-faction in the State.
The other faction of PDP headed by Sikirullahi Ogundele had equally presented Hon Oladipopu Adebutu as the party’s governorship candidate, but the electoral umpire accepted the list submitted by Dayo faction.
In accepting candidates list submitted by Kashamu-backed faction, the INEC cited subsisting court judgements which recognized Dayo-led faction.
Kashamu’s Media Aide, Austin Oniyokor on Sunday, confirmed that his boss had replaced Shittu as governorship candidate.
Oniyokor in a telephone interview said the leaders and elders of the party “prevailed” on Kashamu to throw his hat in the ring in the coming election.
He said: “The party’s stakeholders, leaders and elders met and decided that it would be better for Senator Buruji Kashamu to run if the PDP wants to win.
“Shittu who was at the stakeholders meeting, saw the reason to quit the race for Kashamu.
“I can confirm to you that Shittu had last week Friday intimated the INEC of his voluntary withdrawal from the race.”