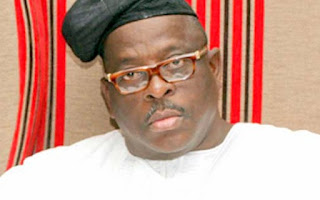 The senator representing Ogun East, Mr Buruji Kashamu, has insisted that he remains the governorship candidate of the Peoples Democratic Party in Ogun State, despite the December 18 judgment of the Court of Appeal in Ibadan, Oyo State.
According to him, the Ibadan appellate court judgment is being misinterpreted to mean that the court had sacked him.
Kashamu, in a statement on Thursday personally signed by him, contended that the Ibadan Court of Appeal’s judgment did not affect his candidature, as it did not emanate from a pre-election dispute.
He said the submission of his name to the Independent National Electoral Commission as Ogun PDP governorship candidate was rooted in the June 24, 2016 judgment of Justice Ibrahim Buba of the Federal High Court in Lagos, which validated the Adebayo Dayo exco as the authentic PDP exco in Ogun State.
“It should be noted that INEC, as a law-abiding institution, has since communicated its decision to recognise and deal only with the Engineer Adebayo Dayo-led Ogun State PDP Exco to the national leadership of our party,” Kashamu said.
He noted that the PDP, not satisfied with Justice Buba’s judgment, went on appeal before the Lagos Division of the Court of Appeal but the appeal was struck out on May 4, 2017.
According to Kashamu, an application filed by the PDP to relist the appeal was also dismissed on July 11, 2018, prompting the PDP to appeal to the Supreme Court, whose decision is still being awaited.
He said, “So, the purported dissolution of the Engineer Adebayo Dayo-led State Exco that allegedly paved the way for the ‘coronati