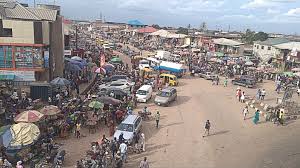 The Ado-Odo/Ota Local Government Area is one of the 19 Local Government Areas of Ogun State, Nigeria. It came into existence on May 19, 1989, following the merging of Ota, part of the defunct Ifo/Ota Local Government with Ado-Odo/Igbesa Areas of the Yewa South Local Government. Ado-Odo/Ota borders on metropolitan Lagos. The Local Government Area is the second largest in Ogun State and it is headquartered at Ota (or Otta) at6°41′00″N 3°41′00″E to the north of the Area. Other towns and cities include Ado-Odo, Agbara, Igbesa, Iju-Ota, Itele, Kooko Ebiye Town, Owode, Sango Ota etc.
It has an area of 878 km² and a population of 526,565 at the 2006 census. Being primarily agrarian in nature, the Local Government Area produces cash and food crops especially cocoa, kola nut, palm oil, coffee, cassava, timber, maize, and vegetables. Mineral resources include kaolin, silica sand, gypsum, and glass sand.
The Local Government is populated mainly by the Awori people, a subset of the Yorubas and the original inhabitants of the area. However, other ethnic groups like Egba settlers, Eguns, and Yewas (Egbados) also live here. There are currently eleven Traditional Obaship institutions in the Local Government Area namely: Olota of Ota, Olofin of Ado-Odo, Oloja Ekun of Igbesa, Onilogbo of Ilogbo, Alagbara of Agbara, Amiro of Ilamiro, Onikooko of Kooko Ebiye, Onikogbo of Ikogbo, Onitekun of Itekun, Onigun of Odan Abuja and Olodan of Odan Abuja Sule.
The Local Government Area boasts a range of cultural, traditional, and historic attractions. One of the most popular is the Egungun (Masquerade) festival in Ota alongside the Oduduwa (Odu’a) festival. There are also shrines such as Ijamido and Ogbodo Shrines. The second oldest storey building in West Africa can be found in Ota, the Vicarage of the St. James Anglican Church built in 1842/
The Executive Chairman is Com. Bashiru Oladele Adeniji.
The Local Government Area is also home to former Nigerian President Olusegun Obasanjo and his post-presidential enterprise, Obasanjo Farms located in Ota.

History of Abeokuta in Ogun State