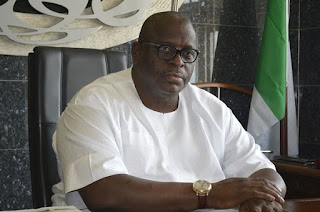 The Federal High Court, Abeokuta, on Wednesday, affirmed the Senator representing Ogun East, Buruji Kashamu, as the governorship candidate of the Peoples Democratic Party in Ogun State.
The court dismissed the suit filed by a member of the House of Representatives, Oladipupo Adebutu, challenging the nomination of  Kashamu as the party’s candidate.
The presiding judge, Justice Abubakar Shittu, held that the case was statute-barred, having been caught up with the fourth alteration.
The court held that the cause of action arose on the April 12, 2018, whereas the suit was filed in December 2018.
It further held that the plaintiffs (PDP and its officers) were stopped from re-litigatingthe issue of who has power to conduct primary elections of the PDP in  the state and submit the list of candidates.
The court, however, submitted that the case  was an abuse of court process.
On the originating summons, the court held that the reliefs sought could not  be granted because the national leadership of the PDP conducted its primaries in flagrant violation of the judgment of the court in Suit No. FHC/L/CS/636/2016.
It said the primaries were illegal.
Reacting to the judgment, Kashamu said, “There was no victor, no vanquished. We are all members of the same PDP family. We are better and stronger together in PDP.”
Kashamu who spoke through his media aide, Austin Oniyokor, added, “What is most important is that we are working together, holding reconciliation meetings and strategising together.
“We are set to deliver the state to PDP on Saturday.”