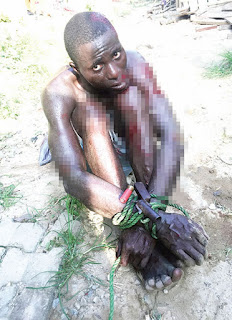 Some workers at Grace and Truth Tabernacle have reportedly disarmed a suspected robber, Samuel Ola, who allegedly invaded the church’s premises in the Magboro end of the Lagos-Ibadan Expresseway, Ogun State.
The 37-year-old Ola and his accomplice, identified simply as Aboy, had attempted robbing a motorcyclist when a mob gave them a chase.
While escaping from the robbery scene, Ola reportedly scaled the fence into the church’s compound.
A worker, Agbeni Bamidele, said he was inspecting a construction work on the premises when he saw the suspect acting suspicious.
The 55-year-old said when he interrogated him, he claimed to be a worker on the site.
He said, “I saw him very close to the staircase that the labourers were casting. I asked who he was and he said he was an iron worker. I am into iron works and I know I kept only two people on the site before I left that morning, but I never doubted him. When I saw my brother, Sunday Ilesanmi, I asked how many of them were on the site, and he said three.
“I told him to check the man downstairs if he was among the workers. While he (Ilesanmi) was interrogating him, I got down through the staircase at the back because I was suspicious of him. When Sunday challenged him, I heard him saying that he was a carpenter, which was different from what he told me. When I observed that he wanted to hurt my brother, I quickly grabbed him and we started fighting.  I never knew that he had a gun, which he wanted to take, until we pinned him down.”
Ilesanmi, an iron bender in the church, said he saw the suspect changing to a church member’s clothes when Bamidele told him (Ilesanmi) to verify his identity.
The suspect, Ola, said harsh economic condition turned him to an armed robber, adding that he had stolen about 50 motorcycles.
The Ogun State indigene said he ran into the church for safety.
He said, “I have been stealing for the past four years and I have stolen over 50 motorcycles. My gang member, Aboy, and I were about snatching a motorcycle from someone when people started chasing us. I scaled the fence to hide inside the compound. I have never killed anybody in my life.”
We learnt that a security guard at the church, Peter Okwandu, had earlier apprehended the second suspect, Aboy.
He said, “I was at the gate when I saw people pursuing Aboy around 1pm. I saw as he ran across the expressway and jumped into a swamp. I heard people shouting thief, I removed my slippers and pursued him. I grabbed him and handed him over to the police. I never knew that his accomplice (Ola) had entered the church premises.”
The librarian of the church, Patrick Osagie, said Ola was the fifth criminal suspect to enter into the church.
He noted that past experiences made the church to hire a security guard to monitor the premises.
The state Police Public Relations Officer, Abimbola Oyeyemi, confirmed the incident, adding that the suspects had been transferred to the Federal Special Anti-Robbery Squad.
Oyeyemi said, “A locally-made gun was recovered from them. On interrogation, they said they were recently released from prison and that they were only trying to make ends meet. They said they usually take stolen motorcycles to Benin Republic. We want to believe that they are members of a syndicate and we want to get other members of their gang.”