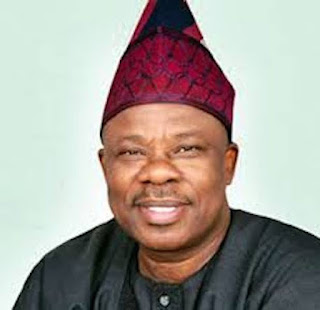 The Chief of Staff to Gov Ibikunle Amosun, Tolu Odebiyi, has resigned his appointment.
Odebiyi, who is the Senatorial Candidate of the All Progressives Congress (APC) for Ogun West, resigned on Friday to pursue his senatorial ambition.
In a signed statement, the former Chief of Staff thanked Governor Amosun for the support, cooperation and the opportunity to serve the people of Ogun during the period. He also thanked the state Executive Council for its support.
“I’m pleased with the confidence Senator Amosun reposed in me by the appointment and the process that led to my emergence as the APC Senatorial Candidate.
“Gov Amosun is a visionary leader, who has impacted positively on the socio-economic development of the state,”the statement quoted Odebiyi as saying.
Chief Odebiyi vowed to make the progress of Ogun paramount in all his future considerations, while praying for peace in the upcoming general elections.
Meanwhile, Mrs Noimot Salako-Oyedele has emerged as the running mate for the governorship candidate of the APC in the state,  Mr Dapo Abiodun. Salako-Oyedele, 52, emerged late Thursday night after a thorough screening with five other aspirants.
A Masters degree holder in Public Health Engineering from the Imperial College of Science and Technology, London, and a B.Sc degree holder in Civil Engineering, University of Lagos, Salako-Oyedele is married with children.