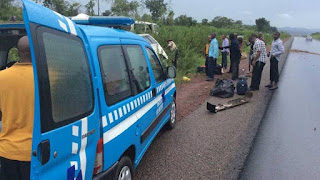 Five persons were on Sunday confirmed dead in an accident involving a Primera car and a Volvo truck around Olorunsogo village, Kobape-Siun axis on Abeokuta–Sagamu expressway.
Mr Babatunde Akinbiyi, the spokesperson, Traffic Compliance and Enforcement Corps (TRACE), confirmed the incident to the News Agency of Nigeria (NAN) in Abeokuta.
Akinbiyi explained that the accident occurred around 1:37 pm, saying that it was caused by excessive speeding and loss of control on the part of the Primera car.
According to an eyewitness, the car marked KTU 875 DP lost control, somersaulted and rammed into a stationary Volvo truck marked LAR 119 YD, parked off road from behind.
“The accident involved five persons, three of them were male and two female.
“Learnt the Primera car is commercial, used in running shuttle from Sagamu to Abeokuta. All the five casualties involved in the accident were in the car when the accident happened,” he said.
Akinbiyi stated that the corpses of the dead had been deposited at the morgue of General Hospital, Ijaye, Abeokuta.
He appealed to motorists to desist from excessive speeding and reckless driving because of its attendant consequences.