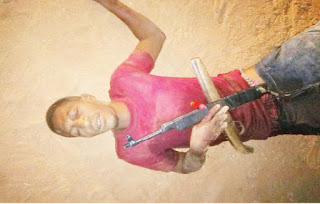 The Ogun State Police Command said it shot dead a member of a robbery gang on Wednesday on the Sagamu-Benin Expressway.
The command said the gang blocked a section of the expressway in the Ogbere area and attempted to rob a luxury bus belonging to Young Shall Grow Motors.
The state Police Public Relations Officer, Abimbola Oyeyemi, said a distress call was made to the police at the Ogbere division.
“This prompted the Divisional Police Officer, John Okon, to lead the anti-robbery squad in the division to the scene, where they engaged the bandits in a gun duel.
“At the end of the encounter, one of the suspects was shot dead, while others fled,” he said.
Oyeyemi, a Deputy Superintendent of Police, added that items recovered from the gang were a locally-made gun, a toy pistol and some charms.
He said the state Commissioner of Police, Ahmed Iliyasu, expressed satisfaction over the performance of his men and ordered a manhunt for the fleeing members of the gang.
“The CP assures members of the public that their security is guaranteed all the time,” Abimbola said.
Read More On Otagossip.com
Share your Story with Ota Gossip
Whatsapp +2348082947815
Email: Otagossip@gmail.com
#OgunNews #OtaNews

I attempts to kill my mother for money rituals – Yahoo Boy