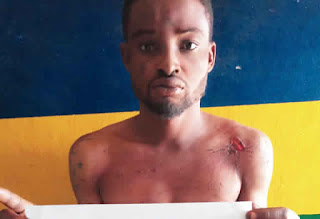 Tragedy struck yesterday, at a burial ceremony in Oguru village, Mowe area of Ogun State, after a 32-year-old Julius Oliseh, allegedly stabbed a guest to death.
The incident which occurred at about 2am, disrupted the event as everyone took to his heels.
However, the suspect, a barber, during interrogation, claimed the deceased, Isikilu Shittu ( 23), was harassing guests at the event , alleging that he fought with anyone who tried to caution him.
According to the Delta State-born suspect, “the party was held in honour of my late mother-in-law. Everything was going on smoothly when the deceased started misbehaving because he was drunk. He harassed guests who were on their own. In my attempt to caution him, he started fighting with me”.
The deceased was stabbed on the neck, left shoulder and face. Eyewitnesses said he could have survived the attack had he been rushed to the hospital early.
Confirming the incident, spokesman for the Ogun State Police Command, Abimbola Oyeyemi, said , “The arrest of the suspect was as a result of complaint lodged at Mowe Police Station by the brother of the deceased, one Akeem Shittu, who claimed he was at a burial party with his brother in Ogunru village via Mowe when argument ensued between the suspect and his late brother, over an undisclosed minor matter. He alleged that following the argument the suspect broke a bottle and stabbed the victim on the neck and he died on the spot.
“Upon the report, the DPO Mowe division, CSP Francis Ebhuoma, led his men to the scene where the suspect who was struggling to escape was promptly arrested and took to the station for interrogation. The corpse has been deposited at the general hospital morgue for autopsy.”
Meanwhile, the Commissioner of Police CP Ahmed Iliyasu has ordered the immediate transfer of the suspect to the Homicide section of the State Criminal Investigation and Intelligence Department for proper investigation and prosecution.
He also warned that the command will not tolerate any act of thuggery or hooliganism capable of sending innocent people to untimely death, because human life is sacred.
“The CP therefore assures the general public that the suspect in this case will face the full wrath of the law so as to serve as deterrent to others in his shoe.”