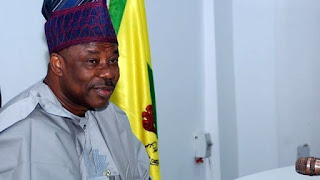 Governor Ibikunle Amosun again blows hot regarding the All Progressives Congress (APC) governorship primary and the 2019 general elections in Ogun state, vowing not to “surrender” the state to those desirous of reaping from where they had sowed nothing.
Amosun added that he and his supporters are on ground, well prepared and ready for the ‘profiteers’ on which ever date the governorship primary is fixed.
The Governor who made this known while addressing hundreds of APC members and supporters at the MTR Hall, Ibara, Abeokuta, on Monday morning urged them to keep their ” gun powder dry” for political battle ahead.
Amosun who momentarily left the MKO Abiola stadium, Kuto – Abeokuta, the venue of this year Independence anniversary celebration after leading some traditional rulers and state officials to cut the 58th Independence anniversary Cake for the MTR Hall to address his supporters, debunked the allegation of “security breach” by five APC governorship aspirants in the state.
He said nobody is facing any threat and urged people not to de-market Ogun state with allegations of security breaches.
“Don’t worry because of them. This position we are today is by the benevolence of God, we are more now, I have told them, we have the government, we have the party and we have the people.
“They have been trying all the tricks in the book, they will have trouble having 10 or five percent of the people. If they do it one million times, the result will be the same.  They thought they are God.  God who dealt with them before will harmer more this time. The disgrace they got last  time (2015) will be more this time.
“Keep your gun powder dry, we will mobilize you with the necessary logistics when the time comes. If they are doing kuru Kere moves, tell them that they will be graced. We are on ground here.  We will give you money for your motor (transport fare) back.
“They writing something, nobody is going to kill anybody, if you have the love of Ogun State,  don’t  de-market it, nobody will kill anybody. We are ready for them, I’m the chief security officer of the state, something is worrying their brain, we are waiting for them.
“Please don’t touch anybody, if they bring money collect from them, what we have done for you the day before yesterday, we are going to do another one, no retreat no surrender, it is not by might but by the benevolence of almighty God.
“It is operation deliver your ward. Go out and mobilize yourself. We outnumber them. Where they have people, please allow them,” Amosun said.

ADC Hails Obasanjo as 4,000 Persons Defect to Party in Ogun