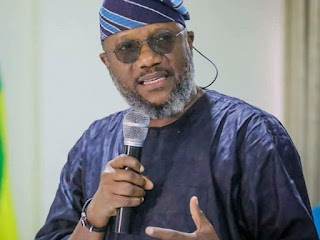 The governorship candidate of the Allied Peoples’ Movement (APM), in Ogun, Adekunle Akinlade, says he has a 50- year vision for the south-western state.
Akinlade, who said that his team was the “most capable and fortified” to take over from Gov. Ibikunle Amosun in 2019, declared that the state would be the pride of Africa within 15 years, if he is voted into power.
He spoke in Abeokuta on Thursday when he paid a courtesy call on the Egba Traditional Council at the Ake Palace.
Akinlade said that he had the experience to transform Ogun, having performed excellently as Special Assistant on Revenue Mobilisation,.
“When I served as Special Assistant to the Governor on Revenue Mobilisation, I was able to raise the Internally Generated Revenue of the state from N700 million to an average of between N6 billion and  N7 billion per month,” he said.
He said that Amosun’s legacies must be sustained, promising that projects started by Amosun would be completed and put to use.
“The developmental strides in the state are less than 10 per cent of what was contained in Amosun’s blueprint; part of the blueprint is the rail project that will cut across major areas in Ogun.
“When I met Amosun, I met a man of vision who knew what he wanted for the state. But the initial challenge we faced was finance. I was part of the history which increased our revenue to what it is today before I left for a federal assignment in Abuja.”
While seeking the blessing of the traditional rulers, Akinlade said that the result of the election would not be determined in Abuja.
“The results of the election will be determined by the good people of the state; no one can impose anyone on them,” he said.
Earlier, the Director-General of the Akinlade Campaign Organisation, Sarafa Tunji Isola, had faulted the allegation that Akinlade was imposed on the people of the state by Amosun.
“The party leadership assessed his character, capacity and capability before endorsing the candidature of Akinlade,” he said. (NAN)